On Wednesday, Jacqueline and I worked in the Live Educational Display at Kadoorie. We were matched with one of the zookeepers to assist him in his daily routine for the morning. His area includes both the mammals and the reptiles. The morning work consisted of cleaning the enclosures and providing the animals with fresh water, checking animal behavior, counting all of the bats, scattering food in the animal enclosures to encourage foraging, and assisting with the wild boars. We worked specifically with fruit bats, barking deer (that’s me, Zack, and the barking deer below), several turtle and tortoise species, Chinese water dragons, wild boar, water monitors, a masked palm civet and leopard cats. 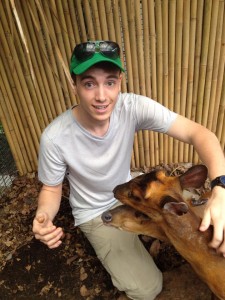 Animals can arrive at Kadoorie multiple ways. Most of them are injured or rescue animals from the wild. Some come from illegal imports via the government until a court case is settled and the government decides the fate of the animals. Other animals (primarily snakes) are brought in by the police because they were in close proximity to humans who they want them removed. A few even come in as abandoned exotic pets. Depending on the time of the year, the number and species of animals that arrive at Kadoorie changes. For example, only in the winter for a timeframe of two months, there is a species of bird that ends up at Kadoorie due to its migration path as the birds often run into the skyscrapers in Hong Kong. Due to such a variety of ways animals arrive at the center, the work is hectic and constantly unpredictable. Kadoorie frequently receives confiscated shipments from the exotic animal trade and once received a shipment of what ended up being 7 000 turtles. They then must care for and maintain the turtles until the government and various other often international stakeholders, decides what to do with them.  This process can sometimes take years, as multiple governments become involved since these imports usually pass through a series of countries on their way into China. Futhermore, the courts might have cases they deem more important and therefore put off the animal case until they deal with the other cases. This raises interesting questions about the status of animal in relation to the law. Kadoorie, however, sometimes has to turn down animals. This is done primarily because they either do not have the housing available, the animal has no conservational value or they know there is no positive outcome so the animals will end up euthanized. 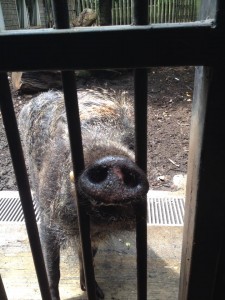 While helping the keeper with his daily tasks we got a sense of how much work it is to maintain even the few animals that are kept at Kadoorie for educational purposes. Just the two wild boars alone, which are a part of their Live Animal Educational Display, take an enormous amount of time and work.  The daily process of maintaining them includes cleaning the pen area, feeding the animal and providing care for their specific needs. For example, treating their hooves and providing mental stimulation are essential to their long term health. These tasks might seem simple but they require a lot of forward planning because of the risk involved while interacting with what remains a wild animal. The occupation of simply caring for the boars’ hooves now involves training the wild animal to perform certain helpful tricks so that the keepers can have access to their feet. This is done through positive reinforcement training involving food. The wild boars have learned, much like domesticated horses, to raise their foot, bow and to walk forward and backwards. These are exercises that the boars would not need to perform in the wild but are essential to their ongoing health in captivity. Because these boars are wild animals certain complications arise that would not normally be an issue in their native environment. The two male boars – brothers – unexpectedly had to be separated after many years of living peacefully together due to the aggressive and dominant tendencies that arose after separating them for a brief period for processing. Once reintroduced the conflicts occurred where before there were none. Due to their new behaviours the boars are now separated for the sake of the keepers’ safety and their own. This is a problem that the boars would not have faced in the wild because they would have had enough space to ‘work it out’. The enclosure Kadoorie provides, while luxurious by many standards, is not big enough to support such antics, so a simple fence has been put in place to keep the boys apart. That combined with hormone therapy makes for a more harmonious existence.  The story of the boars is the tip of the iceberg of the complexities involved with maintaining the physical and mental health of wild animals in captivity.