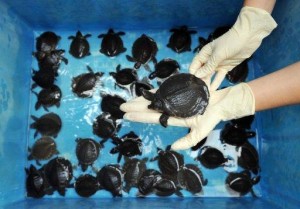 The pig nose river turtle, an animal that is indigenous to Northern Australia and South Western New Guinea, is listed as a vulnerable species under the International Union for Conservation of Nature’s Red List (http://www.iucnredlist.org). Unlike any other species of freshwater turtle, the pig nose is extraordinary in having flippers resembling marine turtles. According to the IUCN, the term ‘vulnerable’ is defined as “a taxon which is facing a high risk of extinction in the wild in the near future” (IUCN 2001).

KFBG received a shipment of 785 pig nose turtles from the government as a result of an illegal import in 2009. They were being smuggled into the country for the pet trade and the clock started ticking immediately on the fate of these hatchlings. At a mere 10 cm, the turtles required a lot of care as they were originally shipped in such poor conditions. Many had died as a result of stress and malnourishment but during the eight months that it took the governments of Indonesian West Papua and Hong Kong to work together to determine what would happen to them, the staff of Kadoorie managed to save 609 of the original shipment. But the biggest question facing all the stakeholders who were involved in the turtles’ long term fate was determining for certain where they had come from in the first place. Releasing animals back into the wild is a very complicated process, something we will detail more at the end of this post. Fortunately for these particular turtles, there was paper evidence from shipping which helped determine that the turtles were in fact from Indonesian West Papua. 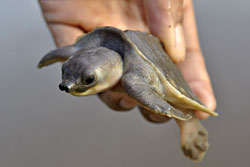 A decision was made to release the turtles back into the wild, however the logistics of such a task are considerable. Custom shipping boxes had to be built, and the turtles could only be in the boxes for a limited time. On top of that, a constant and specific temperature also had to be maintained as well as fresh water supplied, but not too much or they could drown. KFBG felt it was important to do a trial run with 8 turtles to see if they could survive the trip before sending them all. These are but a few of the issues faced with the return and release of these animals. Eventually, however,  various hurdles were jumped and the turtles were released in October 2011 in the Maro River in Indonesian Papua. This was an all too rare repatriation success story for KFBG and the various governments. The complexities of returning to the wild animals seized from the illegal pet trade is more often than not stalled by insurmountable barriers around international and national laws, which compound the more obvious problem of just working out where they came from.

Thanks to the extraordinary efforts of the KFBG teams the villagers in the Maro River were educated about sustainability and the importance of preserving the turtles, thereby minimizing the risk to the potential of this population from human poaching and fishing. But  pig nosed turtles take up to 15 years to reach full reproductive maturation and the average survival rate to that point of many wild turtle species is often not much more than 1%. When released these turtles were still juveniles, thus their capacity to repopulate the region would not be achieved, or even measurable for nearly 15 years. So this is obviously a very long term research challenge. While 609 turtles were released the reality is that it is likely that only a very small percent will survive to adulthood. Tracking the survival rate data of the pig nosed turtles was left in the hands of the villagers who, along with two other communities along the Maro, had pledged to protect them and to provide the local Forestry Officers with updates if sightings occurred. Given the remoteness of the Maro community this was perhaps the most resource rational way of trying to ensure some longer term data could be made available but anecdotal evidence is the weakest level of evidence, often yielding fairly unreliable results. So the repatriation of the turtles raises some critical conservation questions. If we don’t fund the research to reliably assess long term survival of returned species can we really claim anything much more than provision success?

Taking a different angle on the question of success though, the repatriation  of the pig nosed turtles was a worldwide success from a number of different points of view. Kadoorie was able to identify where the smuggled species originated, which, given the illegal nature of smuggling is very rare. Compounding the typical suppression of shipping details is the fact that there is often insufficient data summited to GenBank (http://www.ncbi.nlm.nih.gov/genbank/), the open access DNA databank that is a vital resource to tracing the exact provenance of particular animal species. So after locating the area where the pig nosed turtles could be released attempts to create a grassroots movement within the community surrounding the river were initiated. This was a large part of the turtle’s release success because such communities are likely to also be the poachers who sell the turtles to the trade involving animal trafficking in the first place. Educating them and providing them with viable economic alternatives were central aspects of even the provisional success of this wildlife restoration attempt.

Interestingly, the particular approach to education in Maro was extensively focused on educating the youth of the nearby tribes to value the importance of conservation in terms of local wildlife preservation. Once again, this is a long term investment that works on the assumption that changing the hearts and minds of the children is the equivalent of investing in the leaders of the future. But in Maro it was also the case that the Chief was very instrumental in the success of the release and in educating the rest of the villagers. So he was a key player in managing the immediate issue of preserving the turtles while educating the children on sustainability managed the future. The turtle restoration wouldn’t have taken place without extensive collaboration from numerous stakeholders in addition to the folks at KFBG including the Hong Kong and Indonesian governments, various other conservation NGO’s, even the commercial airlines who helped with transport costs of the turtles and of course the villagers of Bupul. Investing in these collaboration not only advances global conservation efforts they help to raise global consciousness about the potential to preserve and even save critically endangered species. 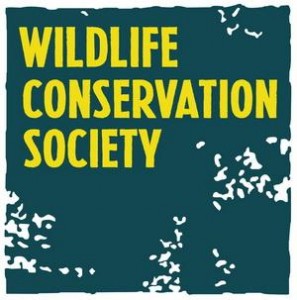 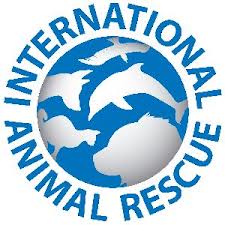 As noted above, as far as releasing animals back into the wild goes, it is a very long and complicated process. One cannot simply release an animal anywhere as it may not be native to that region. Increasingly scientists are revealing the importance of micro-environments to the particularity of certain species. Releasing animals of a separate sub-species could alter the gene pool of the existing population negatively, and the animals might find themselves in ecosystems that cannot sustain them.  There are a number of potentially negative impacts to be considered very carefully before any decisions can be made regarding the release of animals which have crossed international borders. GenBank is a critical resource for this kind of aspiration. It allows DNA to be matched with DNA of animals in other areas and can offer information on where the animals originate. However, this system currently has its limitations because it relies on scientists voluntarily submitting samples. While the database is growing all the time the task of logging all the DNA of all species in all regions of the globe is an insurmountable one. And  in the case of the pig nose turtle it wasn’t GenBank that provided the provenance of the turtles in the end, it was a combination of reasoned logic and paperwork. It was highly unlikely the turtles were smuggled from Northern Australia. The Australian Navy is constantly patrolling those waters for illegal human smuggling so it’s unlikely that the turtle smugglers would risk an encounter with the Australian military. It was therefore more logical  to look towards West Papua as the origin of the turtles and sure enough on this rare occasion the shipping documents had enough information to actually support this hypothesis.  Through collaboration with International Animal Rescue Indonesia, the Wildlife Conservation Society and the ministry of Forestry of the Republic of Indonesia a suitable release site was determined near Bupul, in the Maro river. Had there been a DNA profile of these and similar turtles in GenBank, however, a release site may have been found much faster. As it happened, the pig nosed turtles were released into a river where once pig noses had thrived but where they had not been seen for over 20 years. The gamble was that the river system could still support them.

Given how important DNA is to the possibility of returning to the wild animals that have been seized for the illegal food and pet trade, the DNA database is a critical resource. Yet how plausible is it to begin DNA testing animal populations around the world, including those in remote areas for conservation efforts? What would the resource implications of such an effort be and is it the best use of conservation resources at this time? What would the cost of such a mass project be? GenBank is an attempt to do just this but the fact that it’s voluntary has implications on how comprehensive and therefore how useful it can be. It’s like the wiki of genetic material but hasn’t yet taken off in quite the same way.  Even if we could conceivably accomplish a complete biodiversity DNA map, we are in a period of mass species loss right now. And then there’s the question of evolution and the fact that genes change over time. Perhaps that makes the task easier – for all the wrong reasons – but another question emerges anyway. How useful can a DNA bank be in the face of gene flow and genetic drift? These are just some of the complex questions raised by even a successful conservation effort like the project to return the pig nosed turtles to the wild. 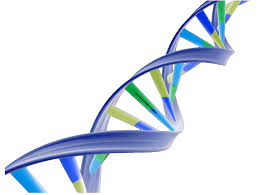