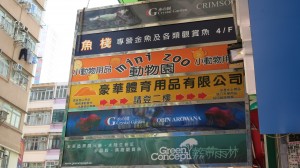 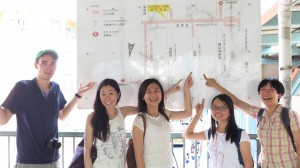 During my stay with the SPCA I had the opportunity to visit Tung Choi Street with Shuping Ho (a researcher at the SPCA) and four SPCA interns, all studying law at Hong Kong University (Jacqueline Ma, Michelle Cheng, Jane Li and Shirley Choi) .  Tung Choi, also known as Goldfish Street, is famous for the sheer number of shops selling all sorts of animals from local species to exotics, but mostly fish and reptiles.  These shops waste no space when it comes to the display of their animals. They are often in small overcrowded tanks and not provided with the proper housing conditions (such as heat and UV lights for reptiles), and many of them are even sick. It is a stark contrast to what pet shops are like in Canada, for the most part. While most of the stores were selling fish and reptiles there were nonetheless plenty of puppies, kittens, rabbits and hamsters also available. Almost all the pups and kittens were high end, very expensive breeds; no mutts in these stores.  While the animals were being kept in clean and reasonably spacious cages out front, our suspicions were that out the back of the stores was another story. It was easy to hear barking from behind the closed doors where customers were not allowed to go. Another suspicious feature of all the pet stores was the ‘no photo’ signs everywhere. 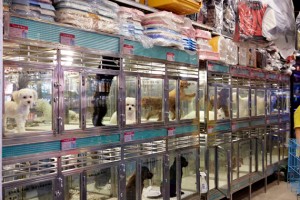 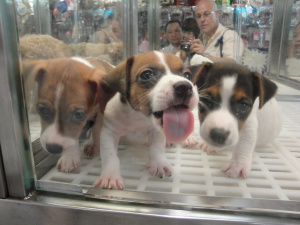 During our time at the SPCA we learned that the reality of the origins of those designer pups and kittens in the pet stores is an unregulated puppy and kitten mill industry where animals are kept in shockingly poor conditions. Much of the SPCA’s investigation work is directed towards finding these mills and shutting them down, while their lobbying work is directed towards encouraging the government to regulate breeders. The pictures below depict the real conditions behind the scenes of the Tung Choi pet shops. The SPCA website has lots of information on the pet industry and especially the puppy trade.  Please visit this link for more information on the Boycott the Bad Breeder Campaign http://boycottbadbreeder.com. For information on the upcoming legislative reforms around breeders, see http://www.spca.org.hk/en/outreach/campaigns/spca-hk-urges-for-cap-139b-amendment 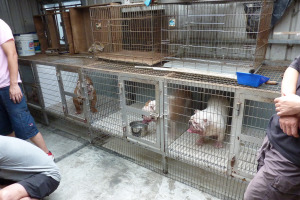 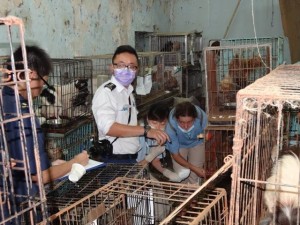 Goldfish Street, as the name suggests, is really known for the phenomenal array of fish shops. Many species of fish are put into bags and hung on display on wire racks, often in the baking sun. Not only do the fish end up overheating in water too hot for them, they also run out of oxygen. 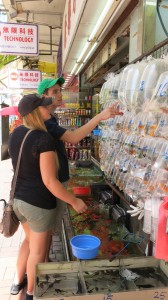 This pushes the fish into extremes and ultimately causes their death as they cannot survive either the low oxygen levels, nor rapid temperature changes. At night, once the shops close, the bags are simply cut open and dumped into the street, including the dead or near dead fish. 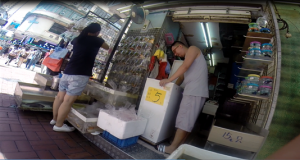 To the store owners, the dead fish don’t even put a dent into their pockets as they cost so little in the first place and are sold at a much higher market value. Even if they only manage to sell a few fish and lose considerably more, they are still profiting. While the display practices might be different in Canada – ie we’re not baking fish in the sun in plastic bags, the idea of disposability at the heart of breeding them in vast numbers is the same.

For example, I used to breed fish and would sell some to pet stores. They would purchase the fish from me at $3 apiece and then turn around and sell them for $12.99 apiece.  For them, there is a 430% price increase so with those economies of scale, we can see how individual fish lives become irrelevant in the big scheme of things where profit margins mean more.

From Tung Choi Street our tour of the pet shop trade took a slight detour. While snakes are kept as pets in Hong Kong, just as they are in Canada, they are also eaten. So our HKU law intern friends led the way as we went off in search of the snake soup shops. 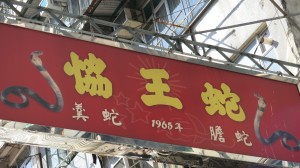 Eating snakes is part of traditional Chinese medicine, more specifically it’s a Cantonese delicacy and it supposedly has high nutritional value. Snake eating is a practice more common in the winter and it seems to be decreasing in popularity with the generations. Young people are less inclined to follow this tradition and in fact none of the HKU interns had ever tried it.  The soup typically contains two species of snake, and they could just as well be deadly, along with spices. At the stores we visited, one had ball pythons on display, and the other had cobras. The snakes are kept live in drawers, like the ones in the photo below, until you want to order the soup and are thus killed and prepared fresh. 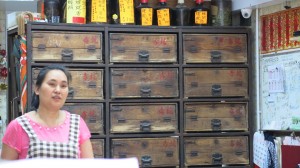 Turns out, snake soup shops don’t just offer snakes, they also sell steamed crocodile and turtle soup! While eating turtle jelly – a derivative of  the plastron of turtle shells, is fairly common in Asia, the experience of actually eating turtle soup was as new to the interns as it was to us. But we found ourselves in one of those situations where the hospitality of the shopkeeper who welcomed us in to look at the snakes, also put us in the position where we needed to return the favour. When she offered turtle soup – we were in a jam. So the compromise was one bowl and 6 spoons! This was one of those moments where I wish I was vegetarian! 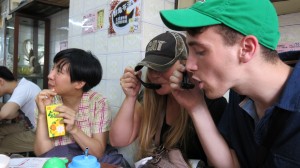 None of us liked it, but the pressure was too great to refuse. Thankfully, Shuping was a champ and finished off the soup for us.

After that experience we went to a local café to rid the taste of the soup! Bring on the Hong Kong version of high tea! 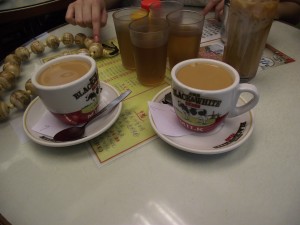 One of the most surprising things about the day was learning that, at least on the face of it, the stores weren’t breaking the law, whether they were selling exotic, Cites listed animals – as many of them were  – or not (Cites is the Convention on International Trade in Endangered Species of Wild Fauna and Flora and is the reference point for regulating the trade in endangered animals).  All the pet stores needed to be lawful was to be licensed by the Agriculture, Fisheries and Conservation Department and as long as the animal can sit down, stand up, turn around and lay down the enclosures then they comply with the existing standards of care required by the animal protections laws. Even the turtles kept in the tiny tanks filled with water were considered ok, because they met the above requirement. So while it seems the pet stores at least comply with certain laws, questions remain about the industry overall. Puppy mills, for example, are also an enormous problem in North America, with Quebec in Canada having the dubious reputation of being the puppy mill capital of the continent. So while pet stores in Canada may not be the primary way puppies and kittens are making it to market, the same problem of designer dogs bred in awful welfare conditions for a seemingly insatiable market applies. And like HK, Canadian animal shelters are full of the very same dogs and cats who later get abandoned or surrendered or dumped – along with their mutt cousins! So whether it’s Cites listed endangered animals whose commercial sale gets around the law because they were supposedly bred in captivity, or puppy mill kittens and puppies whose lives begin in appalling conditions, or goldfish whose lives as individuals simply don’t register as a welfare concern, the gaping holes in the regulation approach to animal welfare seem really apparent. Without the means to implement even the existing regulations, these laws are unable to offer much to the animals who are their subjects.