My last week at Kadoorie ended where I began the placement, in the LED (Live Educational Displays). In the beginning I only had a few days in LED but over this last week I was able to gain much more insight into what many of the keepers have to do on a daily basis. It became very apparent that the relationship the people have with the animals is quite different from those in the WARC (Wild Animal Rescue Centre), and perhaps for obvious reasons. In WARC the animals arrive in a crisis, are cared for very closely; and  the hope for them is that they will be rehabilitated and returned to the wild. 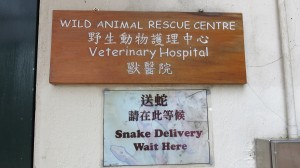 Caring for animals in WARC requires a level of focused attention as well as emotional distance. We don’t always know what’s going to happen to these animals. Often they come in injured or simply too young to survive  and many do succumb.  This bat was just days old and while he made it through the first night with feeding every hour or so, he didn’t make it through the second.

In the best of cases, they get released. Either way, the attachment of the carer can get in the way of making good welfare decisions for the sake of the animals.   A certain kind of caring detachment allows for the focus to stay on the animals and their needs.  Too much attachment, in some cases, can blind the carer to the best welfare for the animal.

However, in LED the relationship between carers and animals is very different as these animals are long term residents. Because these animals are not facing either immanent death (the worst case scenario in WARC) or future release (the best case scenario) attachment is more acceptable, and perhaps even more important to the ongoing health and wellbeing of the animals. Many keepers in LED have emphasized that their closeness with the animals has a positive impact on the level of care they receive. The relationship becomes very intimate as each keeper is assigned to care for the same animals daily. Attachment to the animals allows for more tolerance for the animals at their worst. For example, the monkeys can be very difficult to handle as there are certain orders in which eating and transferring must occur. The monkeys always resist this order so it takes quite a while to succeed at whatever task is at hand. Having a close, intimate relationship with them allows for a greater ability to be patient with them, just as it does with loved ones in human families. 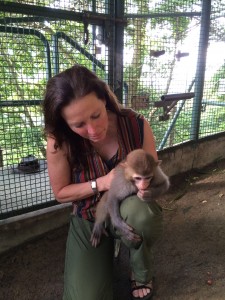 In each department different levels of care are required. The complex relationship between attachment and detachment have been a constant source of debate since we arrived. Both, it turns out, are advantageous but in different scenarios. In WARC, attachment is required at a level that allows for sufficient care of animals who are often in urgent need of support but not to the degree that the big picture surrounding the animal’s welfare is compromised as a consequence of what turns out to be what the humans need rather than the animals. In WARC a kind of attentive and concerned detachment seems to work best if the priority is to focus on the animal’s best interest. In LED where the circumstances are different, a certain level of attachment ends up being the basis for the best care for the animals.  Like people, these animals have personalities which can be frustrating at times. If the keepers were not attached, if they didn’t already care, it would be easy to allow these frustrations to unintentionally impact the level and consistency of care that the animals receive. In the end, the issue of whether or not one should be emotionally attached or detached when caring for animals, comes down to the context in which we encounter the animals.