For most of the Western world, the morning starts with a cup of coffee and people do love their brands: Tim Horton’s, Starbucks, McCafe, Pacific Coffee – the list goes on. But as many now know, the conditions of coffee production across the world are profoundly complicated. A handful of developing nations utterly depend on coffee as a primary export i.e., one of the few means by which they can participate in the global economy. So to meet the demand for export dollars as well as the ever increasing appetites of consumers, huge swaths of forest are being turned into plantations. And this doesn’t even touch on the issue of labour exploitation on those very same plantations! Coffee is nothing if not an ethical minefield – hence the burgeoning market for ‘Fair Trade’. But if the human and environmental costs of coffee weren’t enough of an ethical minefield, a newish trendy coffee is being flagged as unethical for a wholly different reason – cruelty to animals.

Kopi luwak is a type of Indonesian coffee that was popularized in Hong Kong in 2007 after its appearance in the movie starring Morgan Freeman and Jack Nicholson, “The Bucket List”. Due to its portrayal as a milestone life experience like seeing The Great Wall of China, or swimming the Great Barrier Reef corporations hopped on the bandwagon transforming this small locally consumed coffee into an intensive factory farmed global initiative. Kopi Luwak was marketed as exotic and prestigious, and became sought after by consumers. The coffee is made by harvesting the undigested coffee beans from the faeces of the masked palm civet, based on the belief that the animal will select only the finest examples of coffee beans, and that these will produce the best coffee. Though this is fairly unusual, removing the coffee beans from stool collected in the forest from wild civet would cause about as much harm as a nature hike. However, because of the time and energy that would be needed to find and collect the scat, the coffee made from it became extremely expensive and sought after boasting an export price as high as $230 per pound (TIME Magazine, November 25th 2012). Ironically the scarcity and price helped to create a demand and once that was in place quantity became more important than the supposed quality. The end result of this is that civets were poached, caged, and force fed nothing but a diet of coffee beans until they were too ill to continue digesting them, and were dumped back into the wild where their weakened state would often result in them dying (SPCA Hong Kong, Pawprint Magazine, Issue 93, Feb. 2014). A diet of only coffee leads to chronic malnutrition as well as illness resulting from the high caffeine intake.

Of the consumers of Kopi Luwak coffee, many would be unaware of the way it’s made. Of those who do know, some are likely to be apathetic regarding the implications for the animal but some might actually be outraged or disgusted enough to stop drinking it. As is so often the case with prestigious brands, however, a few would find the image cultivated by the drink or simply their own enjoyment of it to be worth the exploitation and suffering that went into it. Sometimes, in what seems to be a vague acknowledgement of the true conditions in which it’s produced, the coffee is labeled as ‘harvested from the wild’, but the BBC as well as the animal rights activist group PETA both did research which found that these labels were often fraudulent (BBC, “Civet cat coffee’s animal cruelty secrets”) (PETA, “Help Civets Suffering from Cruel Coffee”).

The SPCA in Hong Kong has pushed public awareness about the ethical issues surrounding Kopi Luwak. Public support due to increased awareness thanks to these efforts and the efforts of other groups has caused Kopi Luwak to be taken off the menu at many expensive cafes and five star hotels, although overall it is still readily available. To further inform consumers, studies in America have shown that in a blind test, people overwhelmingly do not find Kopi Luwak preferable to other coffees. This case study shows how the media can portray an item to play on the desires and emotions of its consumers while never telling the whole story. In the instance of Kopi Luwak, ideas about luxury, prestige, and having the finest things in life have driven the market despite the reality that the product itself is indistinguishable from many other coffees. Given this reality what possible justification can there be for the ongoing suffering of the civets?

A quick Google search will reveal the conditions of factory farms. Go ahead – try it. Search “conditions of cattle on factory farms” or “chicken pens on factory farms” or “battery hens”. The conditions and methods of slaughter will vary from country to country but these cattle, sheep, pigs, chicken, goats, rabbits, emus, and other animals are typically suffering every bit as much as the civets. The meat in North America is usually packaged in neat little styrofoam containers and by the time it is purchased, its resemblance to an actual animal is virtually non existent.  Many North Americans would be outraged or nauseated by the sight of whole animal carcasses or the live animals that are the staple of wet markets, such as the ones here in Hong Kong. The truth is though, there is a very good chance that the animals seen in these places suffered less than the cows those sterile cuts of beef at the supermarket came from. The consumer never has to see the suffering that is caused to the animals in order to obtain so many of our staple food products, and this separation allows many people to go on buying things which facilitate the cruel treatment of animals and the degradation of the environment. And our so called ‘animal protection’ laws allow this. It’s called ‘necessary suffering’ when it’s agricultural animals we are talking about and it’s only unnecessary suffering our animal protection laws address. 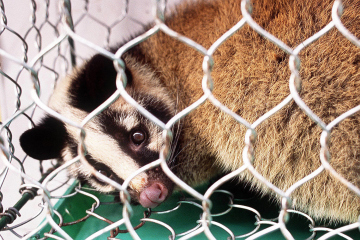 This photo dated 07 December 2002 shows a civet sitting inside a cage at a market in Guangzhou, in the southern Chinese province of Guangdong.

Because many people really do care about animals, they flock to free range, organic, or certified free trade labels, believing that these labels really do indicate a better quality of life and death for the animals that are the source of these products. But it turns out this is far from the truth. So called ‘compassionate consumer’ labeling practices are often misleading at best, and downright  false at worst. For instance ‘free run’ eggs aren’t happy chickens wandering around in fields. On the contrary they are massive barns jam packed with hens all of whom have still had their beaks burned off soon after hatching and all of whom are living in their own putrid fetid waste a lot of the time. 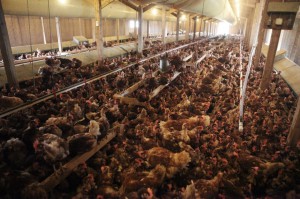 It is hard to condemn consumers for relying on labelling. The time and effort to get beneath the labelling is beyond the scope of many people. So, while labels which give consumers a simple way to make ethical choices might be a step in the right direction, it primarily just gives people a sense of relief from the guilt they feel from knowing the truth about the treatment of livestock and the planet in a global economy which cares more about profit than the conditions of production. Too often sadly, corporations do the bare minimum to put these ‘ethical’ labels on their products, not for the sake of the animals, but to make them more appealing. They have no genuine concern for the animal or the environment, but instead use these often psuedo-ethical labels to increase their prices and gouge consumers who are just trying to do the right thing. It seems nearly impossible to navigate the aisles of a grocery store when so many ‘ethical’ labels and ingredient lists hide more than they reveal. And marketing itself is a whole issue in itself, between the false promises, the appeals to our emotions and desires, and the hidden cruelty, it is hard to feel that we aren’t being tricked constantly by corporations. But we, as consumers do bear some responsibility, especially in the age of the internet where all manner of information about the truth of factory farming is available at a keystroke. Our willingness and our ability to alienate ourselves from the conditions of production allows a variety of unethical practices to continue unimpeded by concerned consumers. Willpower, in combination with access to the truth are important elements to support an ethic that means people have to refuse otherwise desirable things – such as delicious food or prestigious coffee – and when the ethical issues are hidden or blurred by labels with false promises and ritzy beautiful coffee shops it becomes all too easy to just not consider them at all.

It is interesting to see how public pressure has had many successes in limiting the production of Kopi Luwak and convincing people not to buy it while animal cruelty in factory farms remains endemic, despite the overwhelming environmental and ethical reasons to change. There may be some obvious reasons for this – Kopi Luwak is a fad, while the consumption of meat is so deeply embedded human cultures in so many complex ways. Meat consumption is deeply caught up in how we see ourselves as a species and how we relate to others. In a complex interplay of identity politics supported by notions like tradition and power meat eating is inseparable from ideas of class, gender and even ethnicity. Put simply, those who can dominate others eat meat – the rich eat meat because they can afford it but the poor cannot; men eat meat because it is manly to be ‘king of the grill’ and to hunt and kill. Meat eating is one of the buttresses for western notions of cultural superiority. Westerners eat meat and thrive while the rest of the world and especially the developing world, subsists rather than thrive’s on a diet of grains and vegetables. This has more to do with ideology than anything about necessity. And  on top of the complex constructions of meat as desirable, it also tastes good and is sold as a rich source of nutrition. In the end, pleasure seems to be the primary reason for the ever increasing consumption of meat in the world today but the question remains, is human pleasure enough to justify the wholesale suffering of billions of animals let alone the environmental degradation that arises as a consequence of satisfying our voracious appetites. It’s good to remember that “worldwide meat production (beef, chicken and pork) emits more atmospheric greenhouse gasses than do all forms of global transportation and industrial processes.”  (Nathan Fiala, citing the US Food and Agriculture Organization, Scientific American, Feb 2009, Vol 300, Issue 2, p72-75).