Hi I'm Ryanne and I'm a 4th year gender Equality & Social Justice student. Currently, I am wandering down the path of life looking to find myself through experiences. I'm strong believer in the idea that University is your time to learn (obviously); not just about your studies but about yourself. We should take advantage of the time now to experience as many once-in-a-lifetime opportunities while we have the chance. And this trip, to the Kadoordie Farm and Botanical Garden, is definitely one of them. I have always been an animal lover, but never have I been given an opportunity to work with them - this will be a new experience that I am ready to embrace. Just like any new adventure, I know their will be challenges and I am ready to take them on. I am excited to see how this trip will help me grow! Today, was quite possibly one of the most exciting/interesting days of my entire life. It started off by visiting the macaques, which incase you are unfamiliar with the name it is a type of monkey. And once again if you do not know me, monkeys are my favourite animal! It was an absolute surreal experience to be within reaching distance of a furry little critter that I have dreamed about holding since I was a child. One very important thing to take note of when dealing with primates is that eye contact and showing teeth are a no-no. Unlike humans who use these gestures to be friendly, primates take them as a threat. However, in the moment I was so overcome with joy and happiness that I couldn't help but smile and stare. Me being with the macaques was like taking a child into a candy store and telling them not to get excited. After helping to clean and lay out fruit for the macaques, my partner, Krista, and I moved to the Reptile Sanctuary where we got to interact with a couple of Monitor lizards and turtles. It was unreal being so close to them. I was a tad nervous being so close to such a large lizard, but that quickly went away, when I learned that they do not normally bother with humans. Finally, we moved to the where the Flamingos lived. Let me just say that for being such a beautiful bird, they are pretty dirty. They were the animals that I had the least amount of contact with, however, I did manage to snag this sweet selfie. The day ended with a magnificent view from a mountain top, which indeed sparked the Amanda Marshall song, Sitting on top of the world, to play in my head. Being so high up and over looking the city is just credible. You literally feel like you're on the top of the world.

In the Fauna conservation Department at Kadoorie there are many tasks that must be undertaken to maintain the smooth operation of the facility. One vital task is the training of the different animals that are part of the long term animal facility – the LED (Live Education Display). For some of the larger animals in LED such as: the boars, crocodiles, raptors and monkeys training is an important part of the daily routine. Without the training of these wild animals the daily activities that keep them safe and healthy would be neither efficient or safe for both the keepers and the animals.

Boars: The boars are trained to lift their feet as well as to go in and out of transportation crates. Both of these actions are necessary as each is done to check the health of the animal. Their legs must be lifted in a controlled manner in order to properly check the underside of their hooves, as they are prone to infections. Quite often the boars must be weighed and again, it is important that this happen in a controlled environment. The boars have been trained via food rewards to become familiar with the transportation crates that are used to weigh them. Wild boars can be very aggressive; they could easily and inadvertently threaten the life of the people who are providing the health care they need just by virtue of their size and their tusks.  The hoof lifting and crate training protects the health and safety of both person and boars. 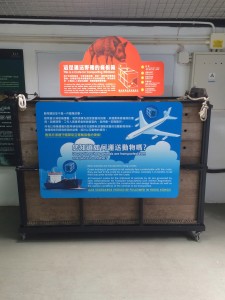 Crates used for handling the Boars 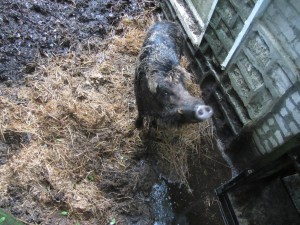 Crocodiles: For some of the crocodilians here at the farm there is quite an unusual trick used in order for the keepers to enter the enclosure. The keepers have trained the crocodiles, when they hear music (Fleur De Lys no less!), to exit their outdoor enclosure and move into an indoor contained area with a door.  When the crocs are inside the keepers are able to enter and clean. Obviously this is a learned behaviour but unlike animals trained for human entertainment – this isn’t a trick. It’s a necessary behaviour that is directed towards enhancing the crocodile’s welfare. It’s good animal centred husbandry. For the crocodile, the alternative would be enduring the daily stress of being captured and re-located, simply in order to clean their home. Clearly, providing an opportunity for the animal to move by itself is an animal centred way of accomplishing the same end. For the keepers this is a more efficient, safer and humane way of providing the crocs with their essential needs in a captive environment. 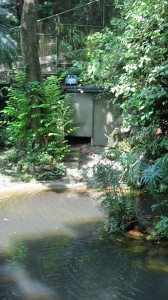 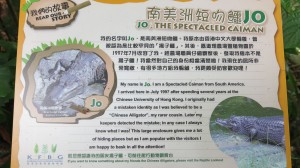 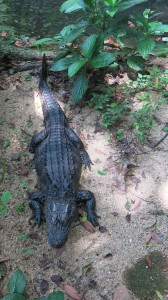 Raptors: Many of the raptors are undergoing falconry training; this means that they are being trained to come down to the person when beckoned. Again, this is a stress preventative for the raptors and a safety measure for the keeper. This training has another important role as well, which involves education of the public. If the public is able to interact with these winged beasts up close and personal, the hope is that it will inspire a love and appreciation of them and further the possibility of cultivating a conservation ethic – especially in the children. In this regard, Kadoorie’s LED follows the same principle as many zoos. The hope here is that greater exposure to animals will produce greater compassion. 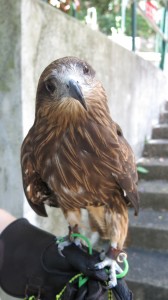 Monkey: As discussed in a previous post, there is a very specific order to moving the monkeys around. This goes for transferring them from cage to cage and eating in front of one another. The keepers have trained them to come, sit and stay on their perches. This is necessary because when feeding and transferring cages, the dominant monkeys must go last. Normally, they would go first, however, in this scenario the other monkeys would be too scared to follow. This is the same for feeding; they are currently training the older monkeys to be nicer to Sita (see post #??) during feeding by rewarding them with peanuts when they allow Sita to eat near them. This may seem like it isn’t all that important but it allows the keepers to work safely and effectively with the monkeys. It also encourages positive behaviour between the monkeys and their mates. We have seen the monkeys’ behaviour with the training and they are difficult at best. Without the training it would be near impossible to manage these creatures and keep them happy with each other. Of all the animals at Kadoorie, the monkeys are perhaps the hardest to manage and this is precisely because they have the most complex social structures. Captive environments, let alone ones based on rescue principles, dramatically alter the wild social structures of these primate colonies and so they create stresses and tensions that wouldn’t emerge in the wild. In captivity the goal is to keep everyone alive and relatively content. In the wild, a monkey like Sita probably wouldn’t survive. She would simply be rejected and die.

In previous posts we have spoken of the person-animal relationship and how forcing animals to suppress their instinctive behaviours can affects them negatively. Vast numbers of animals are held in captivity globally in a variety of contexts – from exotic pet ownership to back yard zoos to the city zoos that are part of the human lives of most nations. The Live Educational Displays department at Kadoorie has shown us some of the real world challenges of keeping wild animals in captivity when the focus is on their health and wellbeing rather than human entertainment. Training in this context is essential to everyone’s safety, yet can look a little like teaching animals to do tricks. Though it can be argued that it isn’t right to alter an animal’s so called natural behaviour, when in captivity, the most efficient and least stressful circumstances must be the focus. If an animal’s only option is captivity, these ‘tricks’ become an essential aspect of their wellbeing.

Although, training animals to perform tasks is a common activity found in recreational attractions parks like Canada’s Marineland and Hong Kong’s Ocean Park, the animal training done at Kadoorie can clearly be distinguished by considering the goal. The point here, as noted throughout this post, is different. The point of the training here at Kadoorie – is animal centred, not human centred. Theme parks train their animals for the sole purpose of human entertainment and if there is an interest in the animals health and wellbeing, it’s generally an economic one. Keeping performance animals healthy is good business. At Kadoorie, however, the training of the animals is done for the very important intention of enhancing the well being of the animal without compromising the safety of the people who care for them. 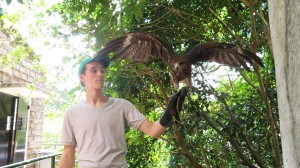 It is fascinating to consider the way the issue – the animal that is trained to do a trick – means something very different in different contexts. When the focus is on animal welfare and not on human entertainment, the trained behaviour is just that, trained behaviour. But the very same behaviour in a theme park is indeed a trick and not one that enhances the life of the animal. On the contrary the trick is for us.